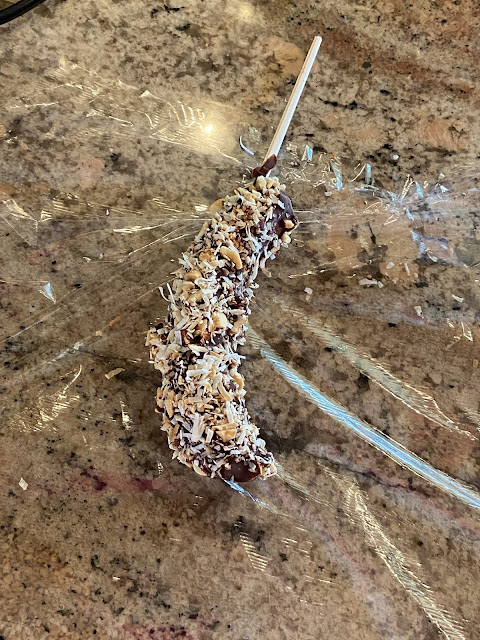 Lately in our area of the country, we've been experiencing hot, hot temperatures!  It's early June and we usually have 70's and maybe low 80's f.  But lately we're experiencing middle to upper 90's!!! (f) Hot.

Does that sound familiar to you???  Typically, I have so many Bananas that get overly ripened, that I have to throw them away.  Making pounds and pounds of Banana bread isn't the answer.

And so, because we've been hot and I had lots of Bananas to use before the next morning, I decided to make Frozen Chocolate-Covered Bananas.

Now mind you, these are actually a pretty healthy snack.

Here is how I made them.

I started off peeling my Bananas.  I set the Bananas aside.  I had some new, but old Chopsticks that I had kept from years ago.  You know the kind.  When you buy take-out Asian food, they always give you a pair of Chopsticks.  Well, now I'm going to put those Chopsticks to a different usage. 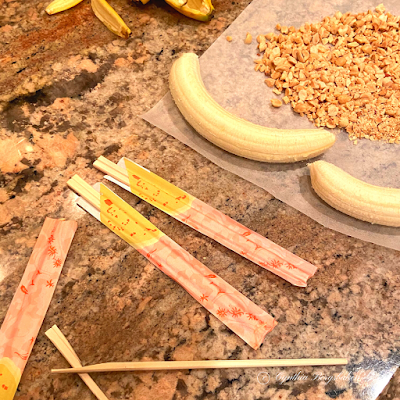 I grabbed my Chopsticks and I broke them apart.  And so you're left with single Chopsticks.

Gently push a Chopstick into each Banana.  Do this carefully and slowly.  I know when I did this, due to the thickness of the Chopstick, it created vertical cracks in my Bananas. 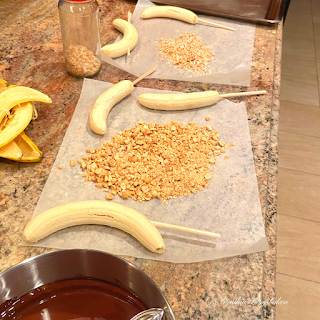 As long as the cracks don't run too deep or horizontal, I was o.k.  Soon the cracks would be filled with Chocolate and be frozen.

Next, I melted around 10 oz. of Dark Chocolate (I used 60% Ghirardelli Chocolate) in a double-boiler along with 2 T. of non-Hydrogenated Coconut oil. (I used Nutiva brand). 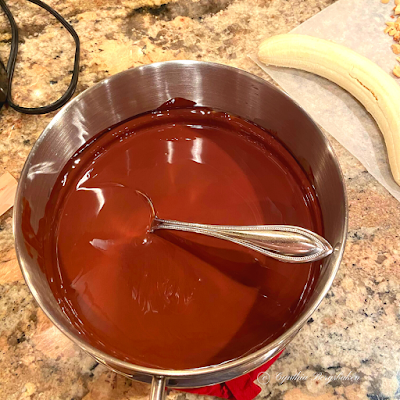 While Chocolate is melting, chop up some nuts to add on top of the Banana.

I used Peanuts.  You can use any nut you like.  This is the protein source and quality fat source for your snack.

I happened to have some Toasted Coconut on hand.  And so, I also added this Coconut on top of my Bananas.  The sky is the limit when it comes to what you can add on top of your Bananas.

I placed my chopped nuts and Toasted Coconut on two separate pieces of Wax paper.

Next, I sprayed a cookie sheet with some Vegetable oil.  You can use butter instead. 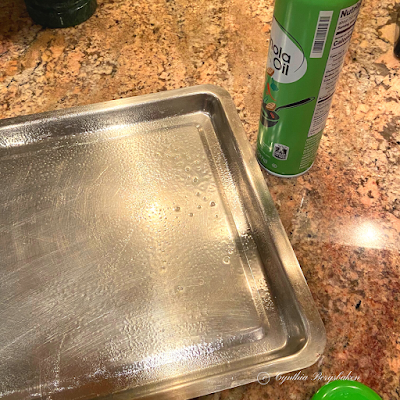 It's time to dip the Bananas.

I gently picked up each Banana-stick.  I supported each Banana with a fork underneath it so the Banana would not crack and fall.

I placed each Banana-stick in to the pot of Chocolate.  I used a large spoon to spoon the melted Chocolate over the Banana.  When the Banana was fully covered with Chocolate, I took the Banana out of the pot with the aid of my large spoon. 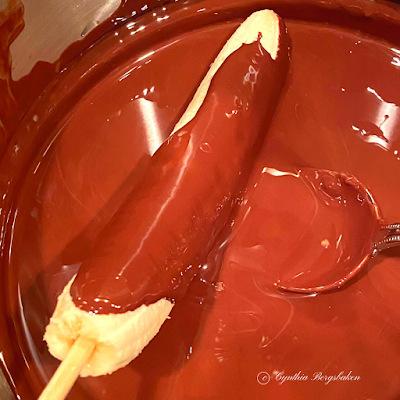 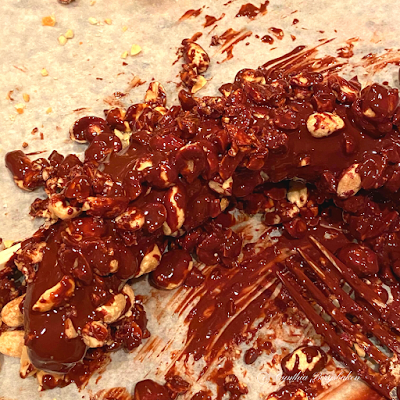 At times, I just used my fingers to pick up the nuts and/or coconut and placed them on top of the Chocolate covered Banana.  Sometimes the nuts/coconut did not want to 100% stick.

After coating my Banana in all the toppings, I took the Banana and placed it on the greased cookie sheet. 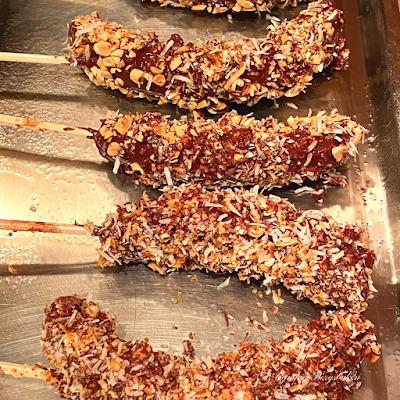 I did this with all the Bananas.

When I was done, I covered the Bananas with Saran wrap and placed them in the freezer for overnight.

The next morning, I gently pried up each Banana with a fork and I wrapped each Banana in it's own plastic wrap. 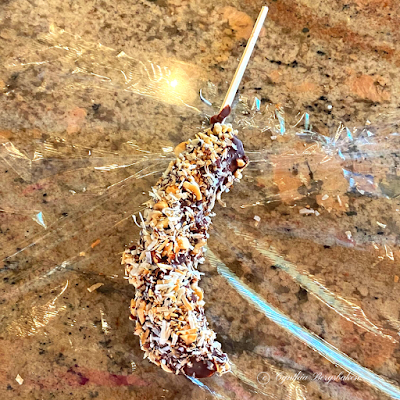 I then took all the wrapped Bananas and placed them in one freezer bag and sealed. 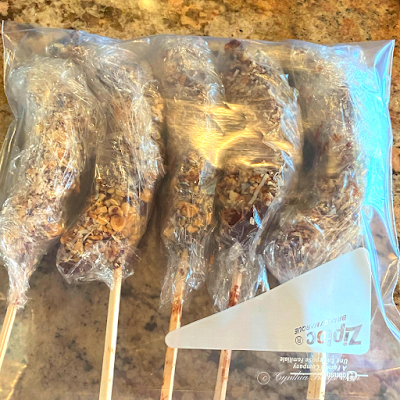 The Frozen Bananas are easy snacks for the whole family to enjoy.  Healthy, cold for those hot days, and a delight to eat.

The question  here is, "What do I do with the extra Chocolate left over from dipping? 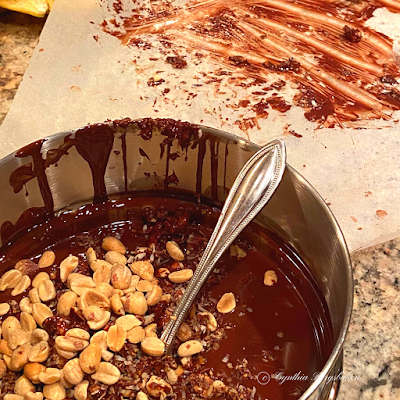 I mixed all the Chocolate, Nuts, and Coconut together. 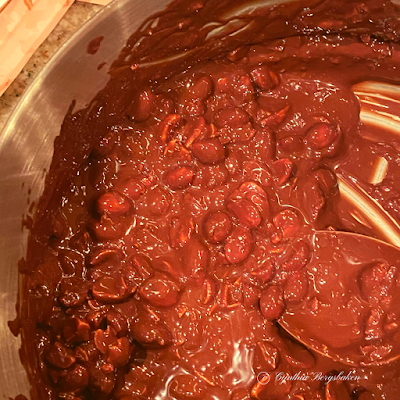 Then I spooned out Tablespoon size portions on to Wax paper. 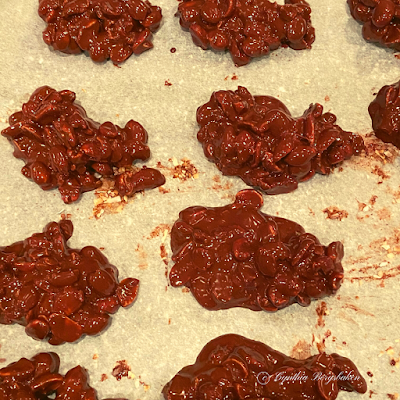 An idea for those small hands-children.  Try buying the miniature sized Bananas and follow the recipe up above.  Just right for small hands.  Otherwise, just cut Bananas in half before inserting the stick.

If you have large Bananas, you may want to cut them in half and then dip.  I used no stick in these.  We just eat them with our fingers or use a fork.

Reiki in the Prairie LLC is a legal Entity under law,  2015.
April 11, 2020
Plagiarism is a crime.  Share only by URL without changing the content!  Thank you. 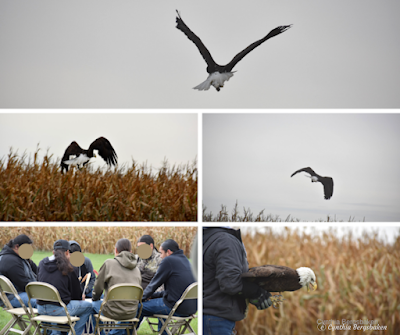 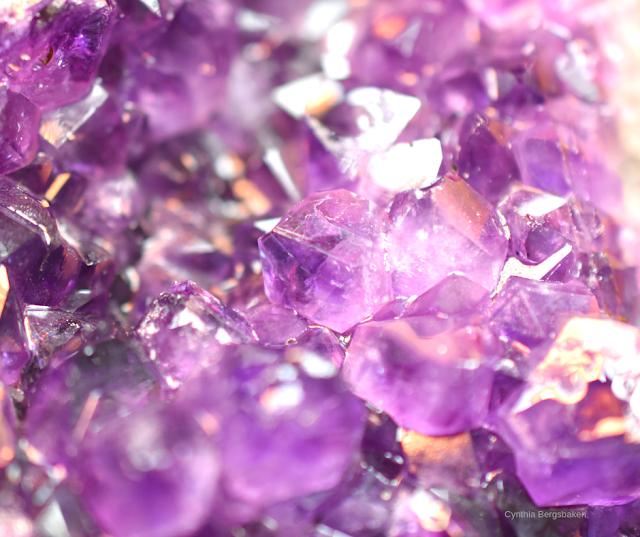 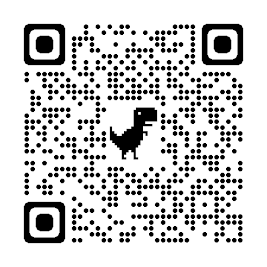